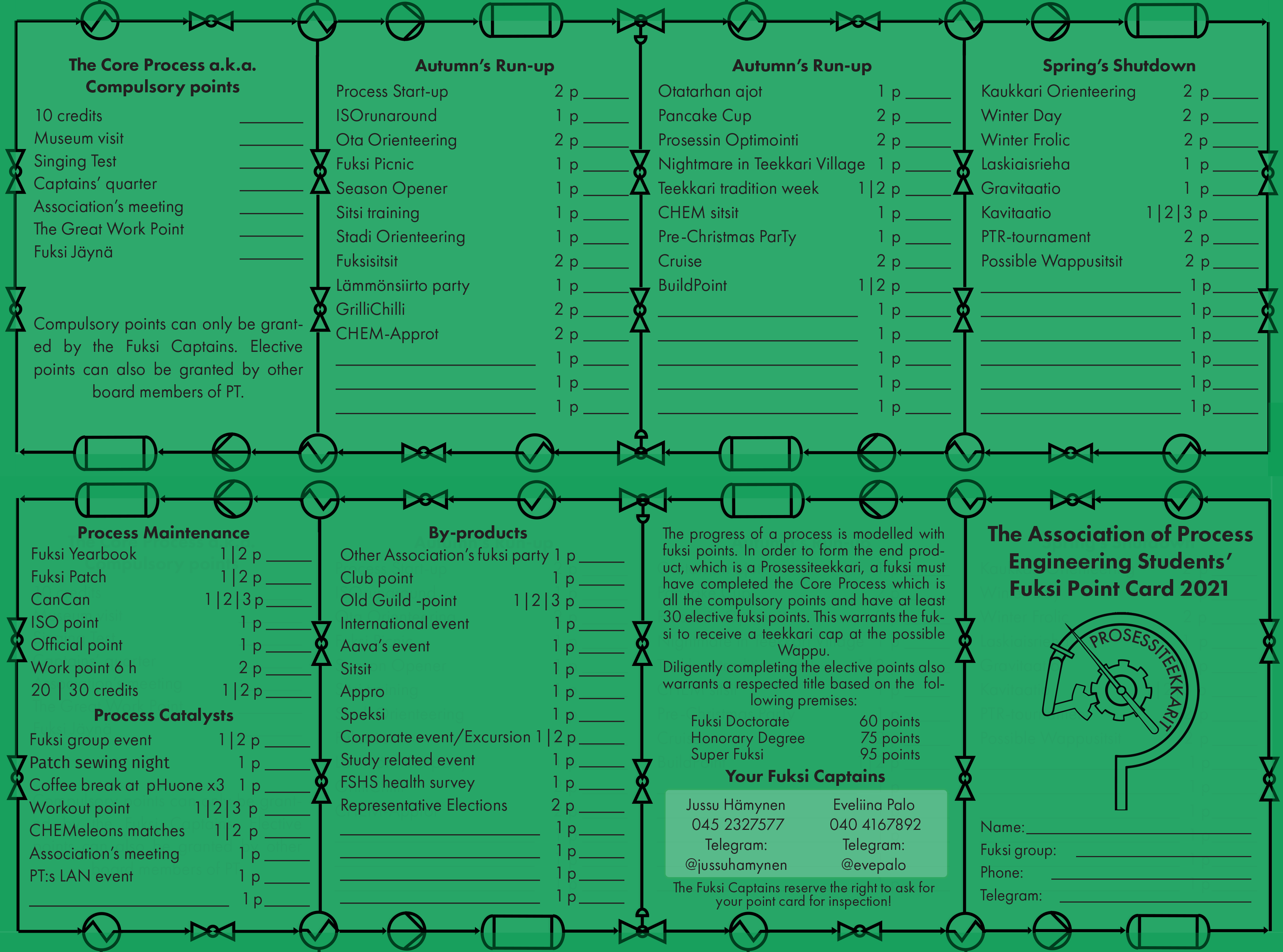 The purpose of fuksi points is to introduce new students to teekkari culture, the association’s and the university’s student association’s operations as well as other students across different guilds.

Each student will receive his or her own fuksi point card. You can collect fuksi points by participating in the Association of Process Engineering Students’, AYY’s or its sub-association’s activities – either by helping to organize events or just by showing up! In general, you can choose how you collect points, but some fuksi points, for example visiting the Polytechnician Museum, are compulsory for all fuksis. It is advisable to start actively collecting points in the autumn, since a want of points on Wappu eve will leave you in want of your Teekkari cap on Wappu day.  Not to worry, though – by eagerly participating in activities, you will fill up your point card faster than you realize! The goal is not to wear anyone out, but to offer good times in great company. Points will be awarded by your fuksi captains and other members of the association’s board throughout the year. At potential Wappu, certificates of eligibility will be handed out and the most active fuksis will be honoured.

The fuksi point cards will be distributed to new students during orientation week. If you did not receive your card or have lost yours, or if it looks like you won’t be able to complete a compulsory item on your card, please contact your fuksi captains. Special arrangements can be made when necessary. But don’t throw in the towel – collecting the required points is no impossibility! Below are listed some fuksi points and events, and you can ask your fuksi captains for more information. 🙂

In addition to the seven compulsory points, you must also complete at least 30 other fuksi points in order to earn your Teekkari cap. A single event will yield 1-3 points depending on the event, so fuksi points add up quickly. If you desire prestige and glory, you may aim for the title of Fuksi Doctorate, which requires 60 points on top of the compulsory ones. 75 points will grant you the title of Honorary Doctorate. Extremely active and enthusiastic participation will allow you to rack up 95 points in addition to the compulsory ones, thus earning you the title of Super Fuksi.

Collecting these points is mandatory for everyone.

Only the fuksi captains can award compulsory points..

The Great Work point
Work a 6-hour shift at an annual ball for the Association of Process Engineers, Chemistry Guild, Guild of Materials and Metallurgy Students or Forest Products Guild. If you cannot make it to any of these, we will make special arrangements.

Association meeting
Participate in the Association’s meeting in the autumn or spring.

Captains’ Quarter
A casual chat with your fuksi captain about how you’ve been during the autumn and the status of your fuksi points.

Museum Visit
A guided tour of the Student Culture Museum.

Singing test
Pass the Association’s singing test in the spring. No need to be nervous, the test will be completed with a small group of your choice.

Workout point (1-3 p)
Participate in a sports event organized by the Association’s sports tutors or others. 1 p per event.

CHEMeleons matches (1-2 p)
Participate in the CHEM team’s game in the university-wide league at Unisport. 1 p per game.

Official point (1 p)
Every year the Association recruits new keen officials to ensure that the association continues to progress forward. Apply to become a officials to earn this point.

Fuksi patch (1 p or 2 p)
Every year new fuksis design their own overall patch, and everyone willing can partake in the process. 1 p for sewing the patch onto your overalls, 2 p for contributing to the design.

Fuksi Yearbook (1 p or 2 p)
Every year new fuksis design a unique yearbook of the class’s students. Everyone willing can partake in the design. 1 p for appearing in the yearbook, 2 p for contributing to the design.

Kavitaatio (1-3 p)
Kavitaatio, the Association’s fuksi party, is a large event traditionally put on by fuksis. 1 p for attending the party. 2 p for working a shift during the event. 3 p for being in charge of a section of the organizing committee.

CanCan (1-3 p)
Become a part of the Association’s dance group. CanCan is not about dance skills, but rather about having fun, which there is always plenty of! The most fun and memorable experience of freshman year will be CanCan. 1 p per gig in which you perform, up to three gigs.

Study related event (1 p)
Participate in a studies-related event put on by the Association or the School of Chemical Engineering.

Other Accociation’s fuksi party (1 p)
Attend a party put on by the fuksis of another AYY guild or association.